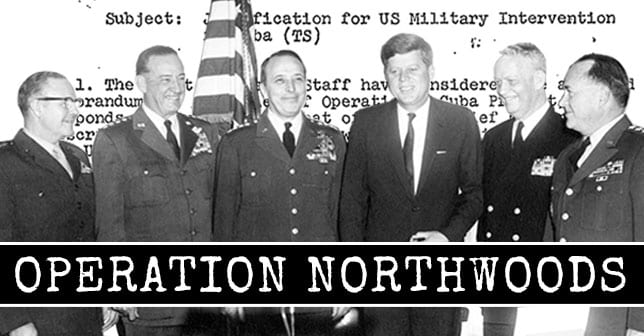 In 1962, the U.S. Joint Chiefs of Staff unanimously proposed state-sponsored acts of terrorism on American soil, against American citizens. The head of every branch of the US armed forces gave written approval to sink US ships, shoot down hijacked American planes, and gun down and bomb civilians on the streets of Washington, D.C., and Miami. The idea was to blame the self-inflicted terrorism on Cuba’s leader, Fidel Castro, so the American public would beg and scream for the Marines to storm Havana.

Operation Northwoods was only one of several plans under the umbrella of Operation Mongoose. Shortly after the Joint Chiefs signed and presented the plan in March, 1962, President Kennedy, still smarting from the Bay of Pigs fiasco, declared that he would never authorize a military invasion of Cuba. In September, Kennedy denied the Chairman of the Joint Chiefs, General Lyman Lemnitzer, a second term as the nation’s highest ranking military officer. And by the winter of 1963, Kennedy was dead…