Global forecaster Gerald Celente’s vision for creating a new kind of peace movement became a super-charged reality when his Occupy Peace rally took over the streets of historic Kingston, NY, on Sept. 20, 2015, to the beat of many different drums and the words of some of the country’s most provocative and thoughtful challengers of the status quo. 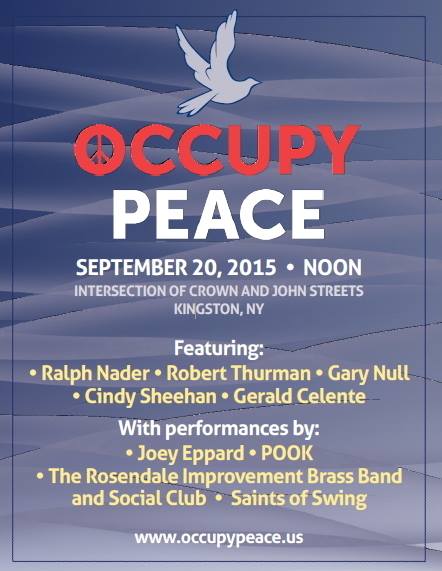 Motioning toward the nearby Ulster County Court House, Celente told the crowd that the seeds of political freedom and liberty had first been planted there, seeds that ultimately comprised 90 percent of the country’s constitution.

“And now they’ve been taken away from us by mad men and mad women that can’t stop the march to war.”

He told the crowd, “You are the beginning of the new movement to occupy peace, not only abroad but to bring peace back home, because that military mindset is robbing us of our freedom and liberty too.”

With those words, the platform of Occupy Peace was launched, to the rousing sounds of “Ain’t Gonna Study War No More.”

We need a new peace movement

Robert Thurman took the stage under sunny skies and declared that as a friend of his teacher the Dalai Lama, “we need a new peace movement.”

“Peace movements of the past have not really overcome Rockwell International or Boeing or General Electric — all of the corporations that have made fortunes from war and have done so for the past hundred years,” he said. “They’re undermining our freedoms and impoverishing our country.”

As fierce as his attack was on what he called “corporatist fascism,” Thurman cautioned the crowd against fighting back by becoming like their enemy.

“Where do you start occupying peace? You have to start in your heart and soul. Even those bad guys who bomb and do horrible things — they’re just unhappy and frustrated and confused . . . they’re misguided and so they continue doing bad stuff.”

“We should not be like them. We shouldn’t hate them. We can be angry with them and forcefully oppose them, but not with hatred in our hearts.”

Thurman listed a number those “horrible things” done against the American people, including what he called the “coup d’etat” following the 2000 presidential election and the fact that to the rest of the world “America is more feared than ISIS.”

In light of the situation, Thurman acknowledged “we have a big job ahead of us:”

“And the only way we can successfully do it is if we do it happily.”

Being happy in the face of the depredations practiced by the “biological robots” who run the country is a real challenge, he said.

Being happy is also the only way to defeat terrorism, he said, so much so that “even if they kill you, you die happy.”

He said he’d made up a new word that day.

“Make sure that when you die — and we all die, whether in peace or war — make sure it’s a ‘die-gasm.’ Once you get in that mood, once you get that happy, you can oppose war and violence because you will be loving. Because you will be kind. You will even love the evil- doers. And that’s the only way to be.”

Living well in a poisoned world 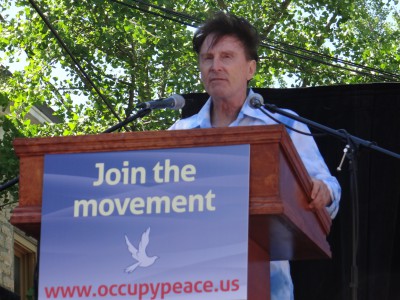 Nutritionist and alternative health advocate Gary Null identified an enemy of the people that is particularly insidious: the American medical establishment, with all its lobbyists, paid-off officials, corrupt bureaucrats and corporate exploiters.

One of the most dangerous positions a person can find themselves in is in a hospital bed, he said.

“The number one cause of death in America is American medicine,” he said. Between 560,000 and 700,000 people die every year of preventable illnesses and conditions. Ten million more a year are injured.

The only kind word Null had for American medicine was reserved for emergency room personnel and procedures.

At the same time, healthcare is the country’s number one economic expense, running to $3.5 trillion a year.

“Diabetes rates are higher in this country than anywhere in the world. Obesity rates are as well. And all the treatments don’t reverse these conditions.”

Echoing Thurman (who had previously said Null should be appointed head of the FDA), Null said “love has the greatest capacity to heal.”

Null extolled the actions taken over the years by Ralph Nader, who he called “the man who’s made more change than any non-politician in American history.”

Saying that he’d been told by liberal Democrats that Nader was no longer welcome in the Democratic Party, Null provided a vision of a world where, if Nader had been elected president, “we’d have had sustainable agriculture, we wouldn’t have a corrupt FDA, the surgeon general would be teaching preventive medicine, there’d be money for public schools and not charter schools. . . ”

“So the next time some liberal Democrat tells you Ralph Nader is somehow no longer relevant, let him know that ain’t true.” 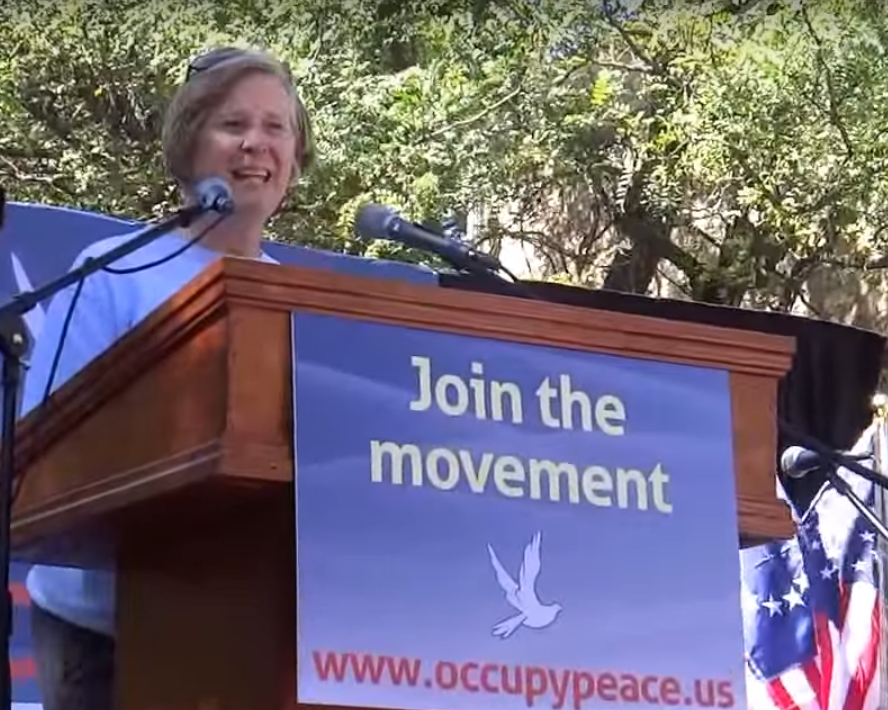 Cindy Sheehan made it clear from the start: the government that’s running this country isn’t her government.

Sheehan made headlines when, after her son was killed in Iraq in 2004, she set up a makeshift encampment outside then-President George Bush’s Texas ranch.

She described herself as “a vegan anti-war revolutionary” who woke up every morning hoping for more opportunities “to collapse this evil empire.”

The trouble is, anti-war sentiment and activities have become partisan.

Sheehan said she’d been “harassed” and criticized by a fellow leftist for attending the Occupy Peace rally and somehow undermining the anti-war movement “by consorting with libertarians and with Ron Paul people.”

“First of all, I told this guy “what anti-war movement are you talking about?”
”
I’ll go anywhere, I’ll speak to anybody, as long as they are saying crush the empire.”

She, like Null, was critical of liberal Democrats in power:

“I can guarantee you, if Romney had won, if McCain had won, and they were doing what Obama is doing, there would be millions of people in the streets.”

The terrorists described in the news everyday don’t frighten her, she said.

“If you want to find terrorists, you don’t have to look any further than Washington D.C.”

She said she agreed with Gerald Celente that the country needs a peace movement “with teeth,” but one that remains non-violent.

“It’s been really lonely since Obama became president,” she said. “It’s because the anti-war movement is mostly partisan. They make excuses for their leaders instead of demands. So they’re not comfortable with me, because I make the same demands on the Obama regime that I made on the Bush regime. And I’ll do the same to the next regime until people of good conscience, revolutionaries like us, take over our communities.” 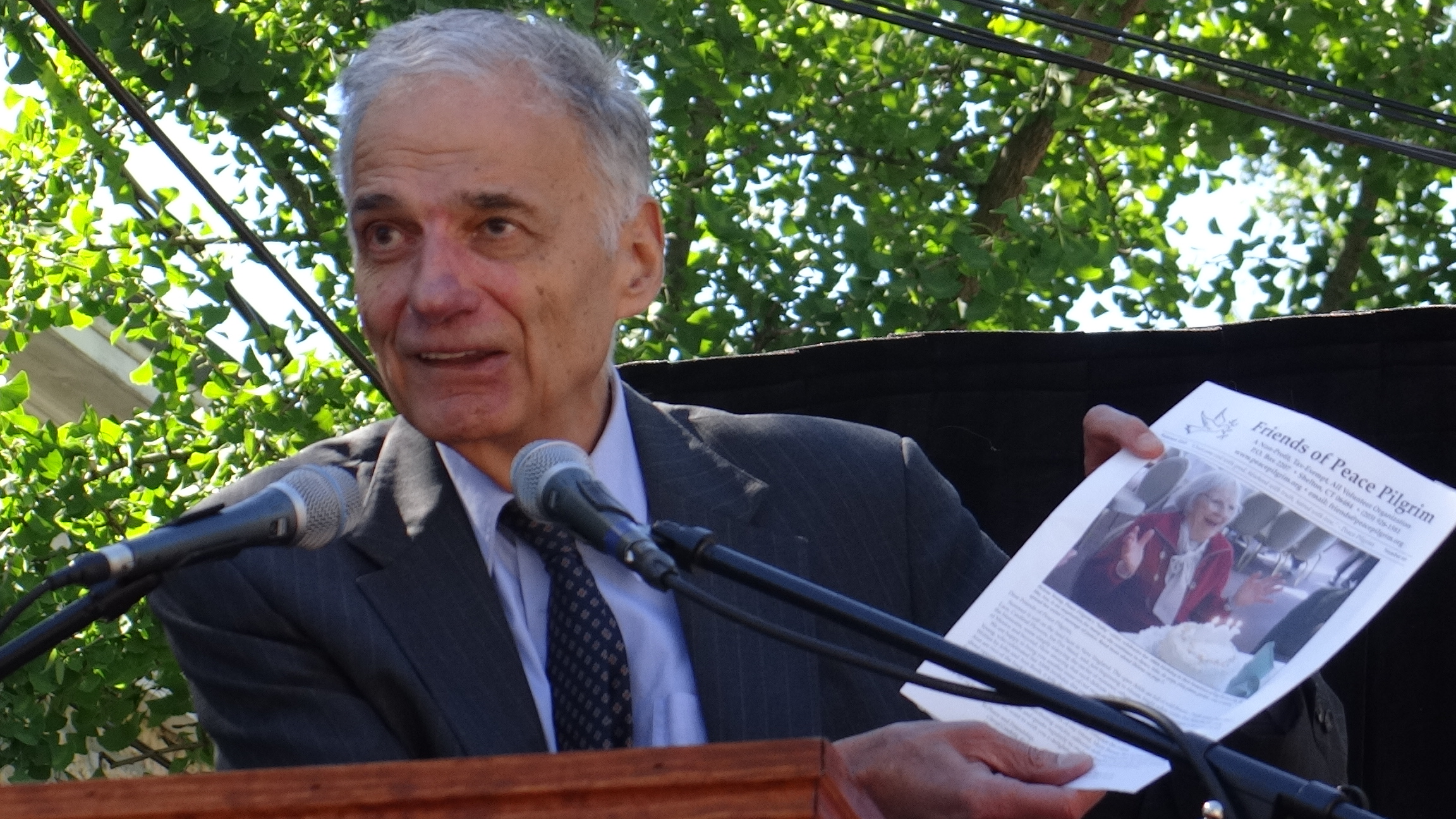 It was left to the indefatigable Ralph Nader, America’s quintessential outsider / activist, to put the Occupy Peace rally into historical perspective. He addressed skeptics who wondered at his interest in speaking at such a small venue as Kingston, since everybody knows only large rallies in places like New York City make an impact.

“Historically, the greatest movements started from small towns and rural areas. I wonder why.”

He answered his own question by paying homage to half a dozen war resistance groups and individuals who didn’t listen when people told them their efforts wouldn’t make a difference. He invoked the name of Helene Young, the Peace Pilgrim, the Women’s Strike for Peace, the Quakers and SANE.

“Less than one percent can turn this country around,” he said. It was a point he made repeatedly throughout his hour-long presentation.

When it comes to modern weaponry, Nader said “enough is never enough” for the country’s major armaments contractors.
He gave as an example a single Trident submarine, armed with multiple warhead missiles, could vaporize within 35 minutes 200 cities in a nuclear strike.

And when it comes to fighting terrorism, the U. S. is recruiting more converts to the Taliban and ISIS than they can convert themselves. What started off as a handful of men in Northeastern Afghanistan has grown to tens of thousands of fighters after the U.S.’s relentless insistence on bombing suspected terrorists, which have included thousands of innocent civilians.

“They call it ‘blowback,” Nader said.

Nader urged the crowd to follow up on the rally by doing what earlier war resisters did — gather in living rooms and talk about what could be done.

He suggested people support a bill that, if Congress or the White House wants to go to war, requires the children and grandchildren of elected officials to be drafted in the armed services.

“That will induce deliberations. They’ll start returning your phone calls then,” he said.

Returning to his theme of how few people are needed to change government, Nader provided the numbers: he said that one percent of the population, roughly 250,00 people, working for between 200 and 400 hours a year in each of the country’s congressional districts, “can turn this country around.”

He concluded his presentation with two of his favorite quotes. The first was from a 14th century Chinese philosopher, who said “To know and not to do is not to know.” The second was from the Roman philosopher Marcus Cicero, who said “freedom is participation in power.”

He predicted that “We’re here to initiate a new burst of energy to wage peace,” he said. to build on the determined work of other war resisters and peace advocates.

But it was Nader, the only man in the crowd wearing a suit and tie, who sought to emphasized the importance of “small town” gathering like Occupy Peace.

Historically, the greatest movements have started in small towns and rural areas,” he said.

The Occupy Peace rally in Kingston would serve as a model that could be spread across the country via the Internet.

After paying homage to half a dozen national anti-war and anti-nuk e movements that began in small towns and living rooms over the years, movements that did the impossible, he said that it’s been proven historically that “you only need one percent of thr population to turn things around.”