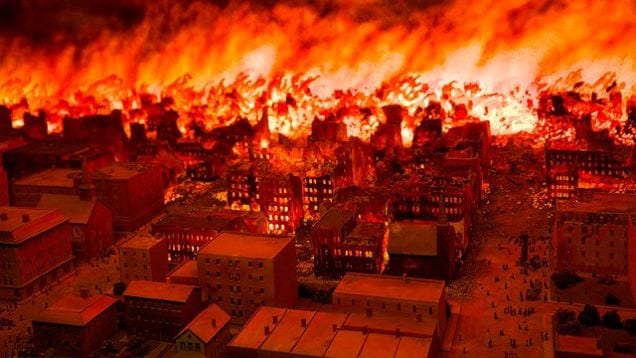 Rome, the night of July 19, 64 AD. The Great Fire burst through the rooftops of shops near the mass entertainment and chariot racing venue called Circus Maximus. The flames, whipped by a strong wind, rapidly engulfed densely populated areas of the city. After burning uncontrolled for five days, four of the 14 Roman districts were burned to the ground, and seven more were severely damaged. It was no secret that Nero wanted to build a series of palaces which he planned to name “Neropolis”. But, the planned location was in the city and in order to build Neropolis, a third of Rome would have to be torn down. The Senate rejected the idea. Then, coincidentally, the fire cleared the very real estate Neropolis required.

Despite the obvious benefit, there’s still a good probability that Nero did not start the fire. Up to a hundred small fires regularly broke out in Rome each day. On top of that, the fire destroyed Nero’s own palace and it appears that Nero did everything he could to stop the fire. Accounts of the day say that when Nero heard about the fire, he rushed back from Antium to organize a relief effort, using his own money. He opened his palaces to let in the homeless and had food supplies delivered to the survivors. Nero also devised a new urban development plan that would make Rome less vulnerable to fire. But, although he put in place rules to insure a safer reconstruction, he also gave himself a huge tract of city property with the intention of building his new palace there.  People knew of Nero’s plans for Neropolis, and all his efforts to help the city could not counteract the rampant rumors that he’d help start the fire. As his poll numbers dropped, Nero’s administration realized the need to employ False Flag 101: When something – anything – bad happens to you, even if it’s accidental, point the finger at your enemy. Luckily, there was a new cult of religious nuts at hand. The cult was unpopular because its followers refused to worship the emperor, denounced possessions, held secret meetings and they were always talking about the destruction of Rome and the end of the world. Even more luckily for Nero, two of the cult’s biggest leaders, Peter and Paul, were currently in town. Nero spread word that the Christians had started the Great Fire. The citizens of Rome bought his lie hook, line and sinker. Peter was crucified and Paul beheaded. Hundreds of others in the young cult were fed to the lions or smeared with tar and set on fire to become human street lamps.