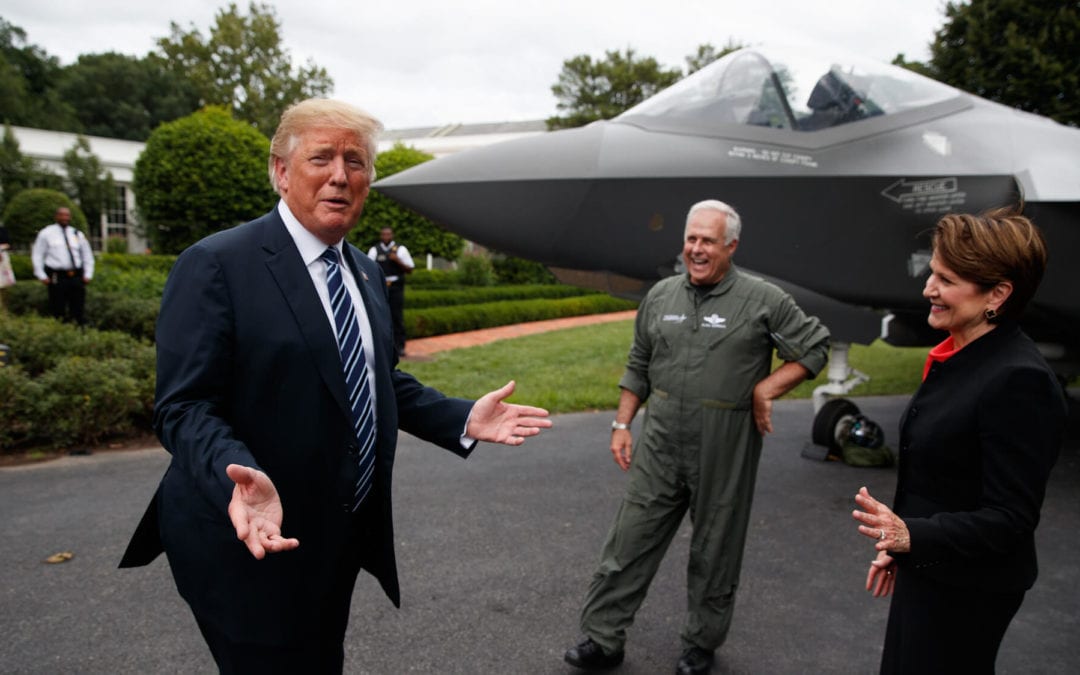 War. Motown singer Edwin Starr claimed it was nothing but a heartbreaker and good news only for the undertaker. But another group rubbing their hands at increased tensions with Iran are military contractors, who saw their stock prices soar at the increased chance of conflict.

Lockheed Martin, famous for its fighter planes, helicopters and missiles, saw its stock price spike to over $416, a jump of seven percent almost overnight. Other defense corporations like Raytheon and General Dynamics saw similar increases in their companies’ value. Meanwhile, Northrop Grumman saw a nine percent rise in its share price, as the stock market rushed to buy a piece of a highly profitable company.

On January 3, the United States carried out a successful assassination attempt of Lt. General Qassem Soleimani via drone, as the Iranian officer and statesman left Baghdad airport to join a peace mission between Iran, Saudi Arabia and Iraq. Iraqi Prime Minister Adil Abdul-Mahdi revealed that President Trump had personally thanked him for organizing peace efforts, even as he was planning the assassination attempt, giving him the mistaken belief that the U.S. gave its blessing to the event and would not attack the Iranian General. Soleimani, respected and admired as a capable and dynamic soldier, was widely considered to be one of the most powerful and influential men in Iran behind Ayatollah Khamenei. The move is almost universally expected to increase tensions in the Middle East, prompting potential wars or other “chaos.”

Millions of mourners came out for Soleimani’s funeral, turning the occasion into a show of strength and an act of collective defiance against Trump’s moves against Iran. Meanwhile, after the government of Iraq voted to expel American forces from its country as a response to the drone strike, the president announced he would send thousands of extra troops to the region. Iran is currently considering its response, but the hashtags #ww3 and #wwIII trended for over a day on Twitter, suggesting the global public was extremely worried the action could spark a worldwide conflict. Over the weekend the United States saw over 70 antiwar demonstrations across the country.

However, economist and co-founder of the Center for Economic Policy Research Dean Baker pointed out that Lockheed Martin’s stock went up by over two percent and Northrop Grumman by nearly four percent on Thursday, the day before Soleimani’s killing. “Looks like a lot of people should go to jail,” he remarked, suggesting there was some serious insider trading afoot. (MintPress recently spoke to Baker about how pharmaceutical corporations are withholding life saving drugs from the public for profit.)

very interesting that Lockheed’s stock went up 2.0 percent on Thursday, the day before the attack. Looks like a lot of people should go to jail. https://t.co/VvlSl4XTpX

The biggest beneficiaries of an unfair stock market are often politicians, whose portfolios, for decades, have done far better than is statistically plausible. Using the financial disclosures of politicians, Professor Alan Ziobrowski of Georgia State University found that members of the House earn “abnormal returns” on their stocks, outperforming the market by six percentage points. Senators, in higher office than House members, perform even better, “showing some of the highest excess returns ever recorded over a long period of time, significantly outperforming even hedge fund managers,” in Ziobrowski’s study’s words. “It’s not rational to assume that they are just plain dumb-lucky,” he concluded. In the five years to 1998, senators’ stock portfolios beat the market by an average of 12 percent a year.

The global wave of right-wing populism has been very good for weapons producers. Despite presenting himself as an antiwar candidate, Trump has greatly increased the military budget and expanded the U.S. role in Yemen. More than half of all discretionary spending goes to the military, with America spending almost as much on arms as the rest of the world combined, according to the Stockholm International Peace Research Institute. The president often likes to remind the country that the stock market is at an all time high. Military contractors are among the best performing of those; Yahoo! Finance notes that if you had bought Northrop Grumman stock five years ago, you would have seen a 146 percent gain today. Meanwhile, in the United Kingdom, nine of the ten largest weapons manufacturers saw their stock prices increase immediately after Conservative Boris Johnson defeated socialist antiwar candidate Jeremy Corbyn in December’s General Election.

The recent rocketing of military contractors’ stock values highlights the growing contrast between the profit motive of capitalism and human survival. So often, what is bad news for the world is good news for the military-industrial complex.