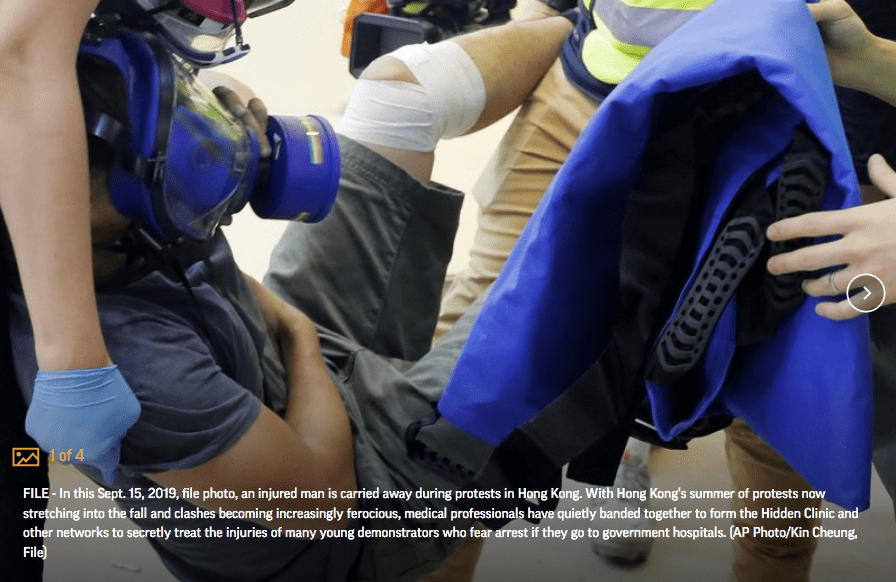 HONG KONG (AP) — As riot police fought anti-government demonstrators on the streets of Hong Kong over the weekend, two photos popped into the encrypted inbox of a group of volunteer medics who call themselves the “Hidden Clinic.”

The images showed the nastily swollen left arm of a 22-year-old protester who had been beaten and were accompanied by a message from the sender that said, “I suspect his bone is broken.”

After exchanges through the night via the Telegram messaging app that arranged an off-the-books X-ray, the protester was diagnosed with a displaced fracture of the ulnar bone.

With Hong Kong’s summer of protests now stretching into the fall and clashes becoming increasingly ferocious, medical professionals have quietly banded together to form the Hidden Clinic and other networks to secretly treat the injuries of many young demonstrators who fear arrest if they go to government hospitals.

The person who messaged the network on the injured protester’s behalf later explained the youth’s wariness by saying, “Many of his friends have been detained when seeing doctors.” 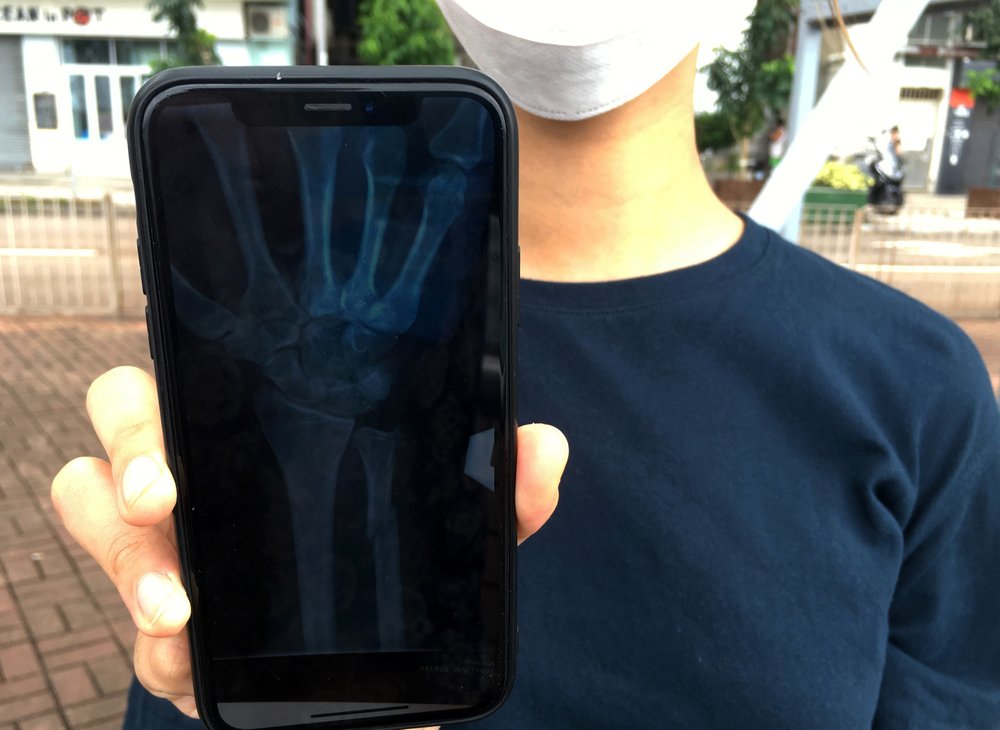 An organizer of an underground network of volunteer Hong Kong medics that are treating injured protesters shows an X-ray image on her mobile phone that revealed a fracture above the left wrist of a protester in Hong Kong. (AP Photo/John Leicester)

The Hidden Clinic says it has clandestinely treated 300-400 protesters with an array of injuries: broken and dislocated bones, gaping wounds and exposure to tear gas so prolonged that they were coughing up blood. It also says the severity of the injuries has increased sharply in the past week, with hard-core protesters and police increasingly tough on each other.

A practitioner who specializes in traditional Chinese medicine and is not affiliated with Hidden Clinic says she alone has treated 60-80 patients, some with multiple wounds from tear-gas canisters and other riot-control projectiles. The woman, who spoke on condition of anonymity because she fears reprisal during her frequent trips to the mainland, uses acupuncture to ease their pain and doesn’t charge for her services.

This behind-the-scenes doctoring, outside of government hospitals, suggests that the official toll of 1,235 injured protesters treated in public hospitals since June 9 significantly undercounts both the number and full extent of those hurt in the more than 400 demonstrations tallied by the government.

Hong Kong’s chief executive, Carrie Lam, says the casualty count includes injuries to more than 300 police officers. The government tally, compiled by the Hospital Authority, only counts patients who visited 18 public Accident and Emergency departments in the territory of 7.5 million people, not those treated privately.

The protests were triggered in June by a now-abandoned measure that would have allowed criminal suspects to be extradited for trial in Communist Party-controlled courts in mainland China. They’ve flared into sustained fury against Lam’s government, testing commitments from Communist leaders in Beijing not to interfere in the internal affairs of Hong Kong, a semi-autonomous hub for international trade and finance that reverted to Chinese rule in 1997.

The full scope of the clandestine efforts to treat protesters isn’t clear, because both the injured and the medics want to protect themselves in the atmosphere of deep distrust that has put Hong Kong on edge. But interviews by The Associated Press with four practitioners and with protesters treated outside the government health system show it is extensive, underscoring the support that the demonstrators enjoy.

One trainee doctor, who wouldn’t give her full name and asked to be identified only as Wong for fear she would damage her career, said her supervisor at a major public hospital doesn’t know of her involvement with Hidden Clinic.

After her regular shifts, she spends her nights dealing with a steady stream of injured protesters, giving them quick, initial diagnoses via text message and photo, and dispensing advice. She then reaches out to the network’s behind-the-scenes doctors, arranging more extensive consultations and treatment — and even help with any costs.

When the protests began, Wong said she used her medical skills on the front lines. She helped assemble Hidden Clinic at the end of July because “I realized the injuries are getting more severe,” she said. 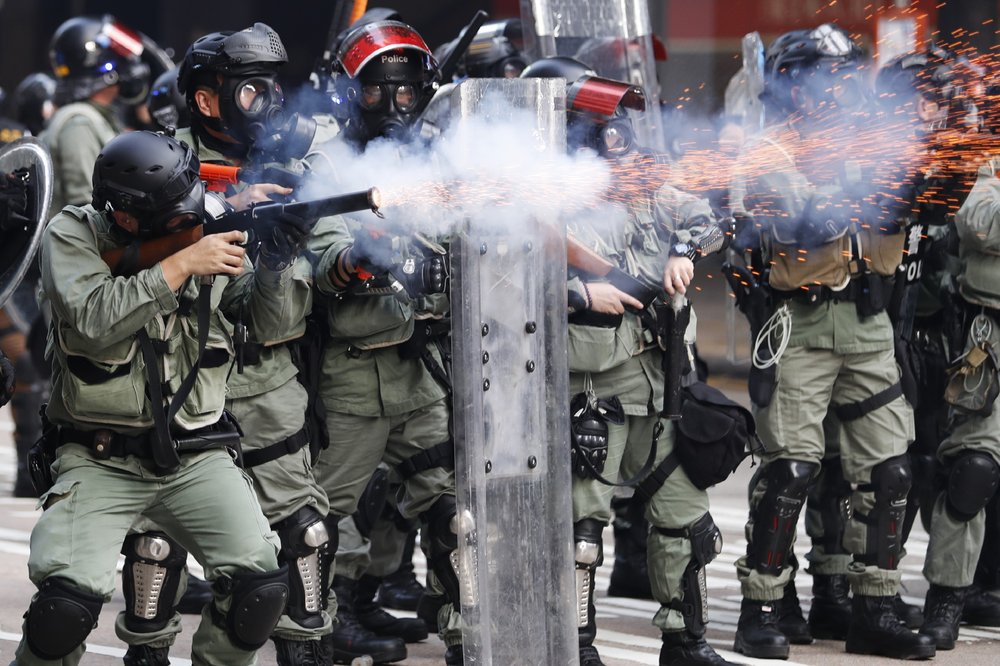 Its name reflects its low profile — its Telegram logo is a bear wearing an identity-concealing surgical mask — but also the many unreported injuries its volunteers see.

“Data published by the government aren’t really accurate anymore, and there are a lot of hidden injuries,” Wong said.

With many distrustful of Lam’s government, and by extension its hospitals, “patients would rather endure the pain and not get arrested,” she said.

For some injuries, Hidden Clinic dispenses temporary treatment that allows protesters to wait a few days before going to an Accident &amp; Emergency facility, so they can lie more convincingly that they weren’t recently hurt in violence.

“You can just say that, oh, you got injured while playing football or something,” Wong said.

Early Monday, when police again battled black-clad protesters after peaceful rallies that drew tens of thousands of marchers, Hidden Clinic’s cases included a protester who messaged a photo of a gruesome neck-wound — round, the size of a plum, dark at the edges and seemingly caused by a rubber bullet. The victim, in his 20s, said he was having difficulty swallowing.

“It was quite alarming,” Wong said. They quickly found a private surgeon who treated him in his own clinic. The man then asked Hidden Clinic to delete any record of their Telegram interactions.

Wong also arranged treatment for the 22-year-old with the broken arm, as well as two other people with wounds that needed suturing. The appeals began arriving from 9 p.m. or 10 p.m. Sunday, and she finished about 4 a.m., before dealing with more cases later in the day, she said.

Asked about protesters’ fears of public wards, the Hospital Authority said in a statement to AP that it “upholds the importance of patient confidentiality, which is the cornerstone of patient confidence” and “has also reminded law enforcement departments to be mindful of the respect for patient data privacy in hospitals.”

“Government hospitals have police,” said a 19-year-old who came prepared for trouble at Sunday’s protest, wearing a metal shield on his left arm, a hardened helmet with full-face reflective visor, protective pads on his knees, elbows and shoulders, a gas mask, a walkie-talkie and a black jacket reeking of tear gas. 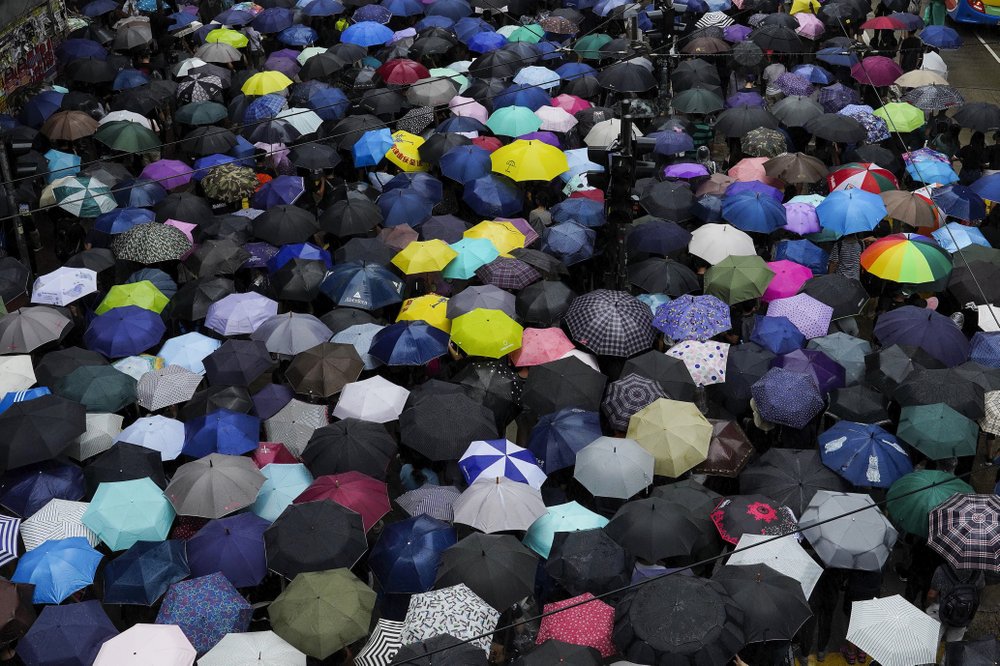 Protesters march in the rain on a street in Hong Kong. (AP Photo/Vincent Yu, File)

Struck under his right armpit by a rubber bullet in a previous skirmish, the student said he used Telegram to find free treatment from a private clinic that diagnosed bruising but no broken ribs. He identified himself only as John, for fear of retaliation.

In a detention that seemed to confirm the concerns of protesters that government clinics aren’t safe, a pregnant 19-year-old detained Monday was being watched over by two policewomen in the maternity ward of the Tuen Mun Hospital, according to the hospital.

An 18-year-old who was struck on the head by a tear-gas canister on Oct. 1, when Hong Kong shook with protests, rioting and the police shooting of a protester, said she turned to Hidden Clinic to treat dizziness, vomiting and headaches because “I may be arrested if I go to the government hospital.” She refused to give her name.

“I can’t believe the government,” she said. “The government will use any ways to find out the protesters.”

“These kids are striving for a whole era’s freedom,” said the Chinese medicine practitioner who devotes one evening per week to treating protesters, seeing as many as a dozen each time. “For those of us who don’t dare go out, the very least we can do is treat their wounds.”