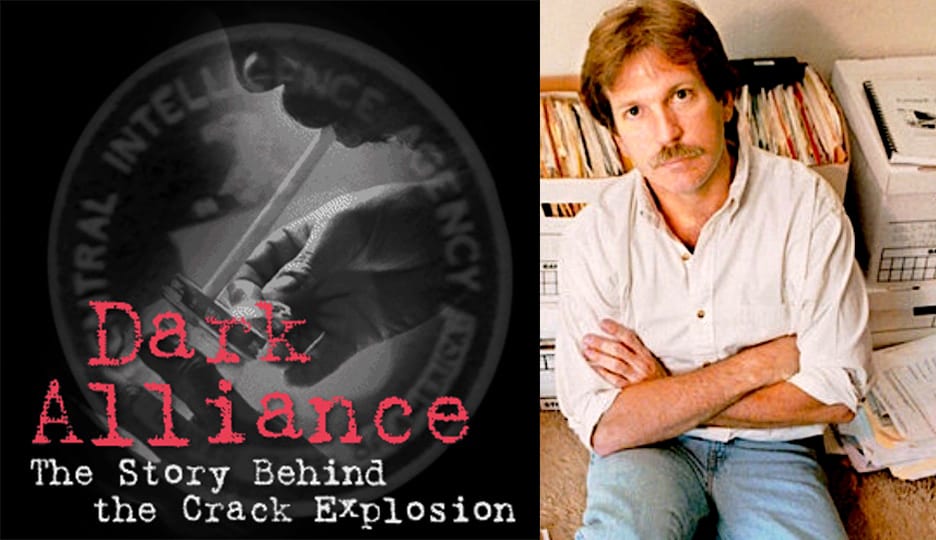 For the better part of a decade, a San Francisco Bay Area drug ring sold tons of cocaine to the Crips and Bloods street gangs of Los Angeles and funneled millions in drug profits to a Latin American guerrilla army run by the U.S. Central Intelligence Agency, a Mercury News investigation has found.This drug network opened the first pipeline between Colombia’s cocaine cartels and the black neighborhoods of Los Angeles, a city now known as the crack capital of the world.

– From the introduction to the original Dark Alliance website, August, 1996

The investigative journalism series that started it all – that changed (or at least, at long last, confirmed) the way all of us think about the war on drugs, the CIA, and U.S. policy toward Latin America – has had a troubled life on the Internet.

In August 1996, Gary Webb began publishing the results of a yearlong investigation that traced the money fueling the horrific U.S.-backed “contra” war against Nicaragua to the profits from Los Angeles’ 1980s crack epidemic. The CIA led its contra army to spend the entire decade terrorizing the Nicaraguan people and their Sandinista government, happily allowing the contras to flood Los Angeles and other North American cities with cocaine to fund their efforts. Gary provided extensively documented evidence that while poor communities in L.A. paid the price of the crack explosion – from rampant addiction in their neighborhoods to oppressive law enforcement and jailing with Reagan’s stepped-up “war on drugs” – the United States government protected the men moving a great deal of the drugs coming into the city. Local dealers faced life sentences while the bigtime narcos from Washington to Managua went free.

What came next is well known. Gary’s story, and the website he and the San Jose Mercury News created to showcase and expand upon it, were initially the talk of the global village. Politicians cited the article in both Sacramento and Washington. The CIA launched an internal investigation. Millions of people were visiting the website.

But then the backlash came. The L.A. Times, embarrassed at having missed a major story on its own turf, and the New York Times, happy to follow its colleagues’ lead in squashing a story that didn’t fit with its own narrative, wielded their mercenary pens against him. Rather than follow up on his exhaustive research, the attack dogs on both coasts pulled his work apart and attacked him for things he hadn’t even said. Although the CIA’s internal investigation would later confirm many of Gary’s own claims, the paper retracted the story and marginalized Gary to the point where he was forced to quit.

San Jose Mercury News executive editor Jerry Ceppos’ cowardly retreat from Dark Alliance included deleting the website, and destroying thousands of undistributed CDROM versions of the site. It was the Internet’s first book burning. Among Ceppos’ lame excuses for the latter was that the now-famous Dark Alliance logo (above; how much more straightforward could a logo for a story about the CIA and crack be?) was “too suggestive.” (Inherent in that statement is that Ceppos’ could not find sufficient fault with Webb’s story itself to censor the website.) And so, for a long time, the most talked-about investigative news story of the 1990s was largely inaccessible to world beyond the small daily’s reach.

Even when copies of the text from the published stories were posted on websites and sent out to mailing lists, it was not the same. The Dark Alliance website was truly groundbreaking, one of the first innovations in using the Internet to not just replicate but expand what journalism could be. Rather than remaining static, the articles lived on the website, surrounded by images, sound files, reader discussion forums that Gary participated in, and an entire library of background information supporting Webb’s powerful case against the C.I.A. Millions of readers flocked to these pages, a nearly unheard-of response in those early days of the World Wide Web.

Until the end of his life, Gary was immensely proud of this website and its role in expanding the idea of what Internet journalism could be. In 2002, having gotten his hands on one of the few remaining copies of the CD, he triumphantly resurrected it. At that time, Gary wrote:

“This site, which won a CNET “Best of the Web” award in 1996, was constructed from a CDROM made by the San Jose Mercury News to promote its Internet presence. Thousands of CDs were made, then quietly incinerated. The reason: the website’s logo—a crack smoker superimposed over the CIA seal—had been criticized as “too suggestive.” Fortunately a few CDs were saved from the flames. Despite the passage of time, this webpage remains a brilliant testament to the power of Internet journalism.”

Gary Webb, a hero of authentic journalism, an inspiration to truth-seekers around the world, but now an unemployable outcast in the world of commercial newspapers, took his own life on December 10, 2004. His resurrected website died with him: the company hosting it was bought out and the files lost.

The expanded version that Gary posted in 2002 is gone. But the original pages, still bearing the logo of the newspaper that gave birth to and then disowned them, are up again. A few elements from the CDROM have been cleaned up to make the pages easier to navigate, but the content you will see is essentially unchanged from what those millions of first-time readers saw when they logged on nearly a decade ago. As with Gary’s original “director’s cut” version of it, this project is being carried out for educational and historic purposes, and, happily, is in no way connected to, nor sponsored by, the San Jose Mercury News.

Published on August 18, 1996, these first two reports of the Dark Alliance series introduced readers around the world to the players and relationships of the whole tangled affair. Webb identifies the alliance at the root of his story as “the union of a U.S-backed army attempting to overthrow a revolutionary socialist government and the Uzi-toting ‘gangstas’ of Compton and South-Central Los Angeles.”

Here we meet Ricky Ross, L.A.’s top dope dealer in the early eighties, and the men from the Nicaraguan Democratic Force (FDN, the 5,000-man, CIA-commanded group that led the contra war against the Sandinista government) he bought his cocaine from. We see the evidence of the help they received from the air force of El Salvador (a country receiving support from the U.S. for its own massive, bloody war against an internal popular uprising.)

We also learn about the “wall of secrecy” that allowed the Nicaraguan traffickers to operate with impunity. Attempts by U.S. law enforcement to bring down the Nicaraguan traffickers repeatedly fizzled out, leaving many agents convinced that the CIA was blocking their efforts. A DEA agent working in El Salvador documents cocaine flights leaving that country only to have his reports ignored and in internal investigation launched against him.

In the reports filed for the August 19 edition of the San Jose Mercury News, Gary Webb looks back to the origins of crack cocaine use in Los Angeles. Just as the invention of crack was bringing cocaine out of the parlors and clubs of the elite and into poor urban neighborhoods, a young Ricky Ross used his connections to the Crips organization in L.A. on the one hand, and to Nicaraguan suppliers with unbelievably low-priced cocaine on the other to become the king of the crack business. A former L.A. narcotics officer tells Webb of Ross that “…there’s no telling how many tens of thousands of people he touched. He’s responsible for a major cancer that still hasn’t stopped spreading.” Through Ross, the Contras and their North American allies were able to pour tons of cocaine into the streets of L.A. to fund their war.

Drug agent thought she was onto something big

In his third set of reports, Webb tackles the racial aspects of his story, asking why the black community has been so disproportionately hit by the crack epidemic. He writes:

Nothing epitomizes the drug war’s uneven impact on black Americans more clearly than the intertwined lives of Ricky Donnell Ross, a high school dropout, and his suave cocaine supplier, Danilo Blandon, who has a master’s degree in marketing and was one of the top civilian leaders in California of an anti-communist guerrilla army formed by the U.S. Central Intelligence Agency.

While Ross sits in prison, Blandon leads a comfortable, U.S.-subsidized life back in Nicaragua as a member of the new business class there. Blandon’s white or well-connected, contra-allied associates in both Central and North America also remain free. Webb ties this in to the widely noted disparity in sentencing between whites and blacks in U.S. courts and the general trends that have caused African Americans to bear the brunt of the war on drugs in the U.S. The Dark Alliance story had a particularly strong impact in California’s black community, in large part because of Webb’s ability to lay out such connections between oppressive U.S. foreign policy in the 1980s and the contemporary problems that community faced.

War on drugs has unequal impact on black Americans

Day Three also marks the unveiling (and unleashing) of the full Dark Alliance website, complete with the additional documentation, multimedia exhibits, reader forums, and links that made it so ahead of its time.