Behind the Assassination of Soleimani 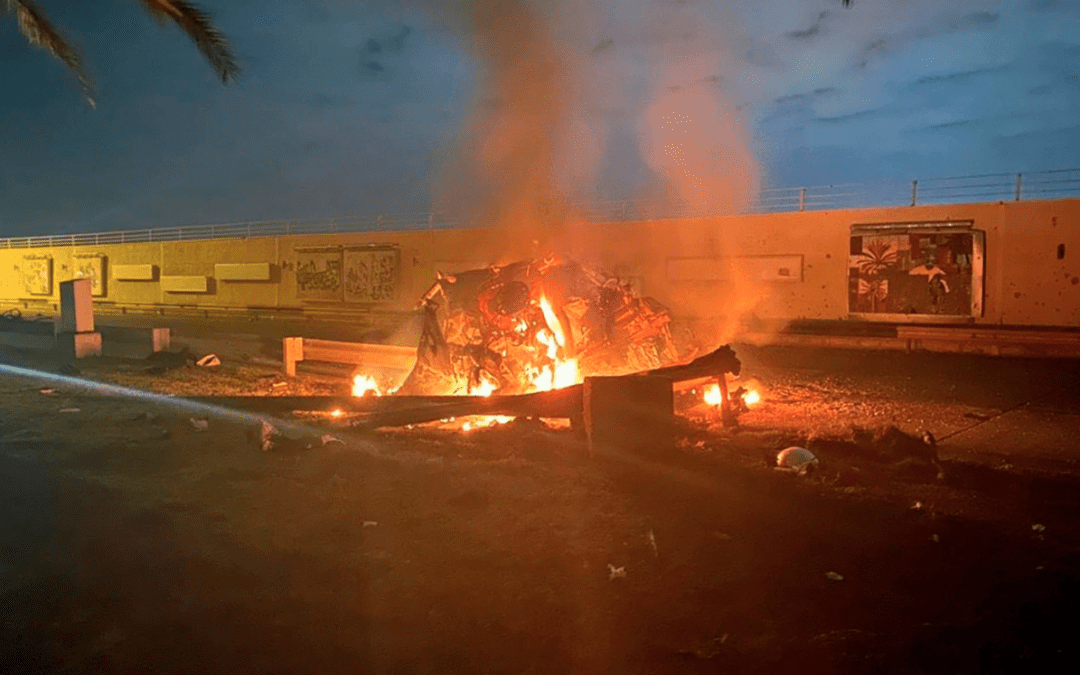 Iraqi Prime Minister Adil Abdul-Mahdi claims that in the build up to Qasem Soleimani’s assassination, President Trump threatened to carry out false flag murders of Iraqi protesters that would then be blamed on Abdul-Mahdi unless he agreed to hand over 50% of the country’s oil revenue.

According to the Strategic Culture Foundation’s Federico Pieraccini, Abdul-Mahdi was angry about how the U.S. had failed to complete the rebuilding of Iraq’s infrastructure and electricity grid projects, “unless they were promised 50% of oil revenues, which Abdul-Mahdi refused.”

Abdul-Mahdi then gave a speech to the Iraqi parliament in which he explained that the main reason behind his resignation was Trump pressuring him not to make a deal with the Chinese and threats that the U.S. would engage in false flag shootings of protesters and security forces.

Days after the assassination of General Qasem Soleimani, new and important information is coming to light from a speech given by the Iraqi prime minister. The story behind Soleimani’s assassination seems to go much deeper than what has thus far been reported, involving Saudi Arabia and China as well the U.S. dollar’s role as the global reserve currency. 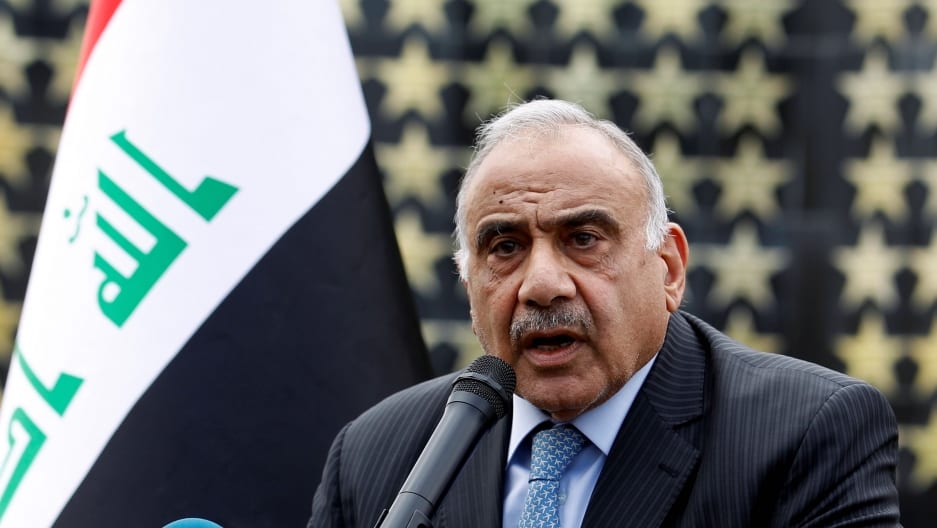 The Iraqi prime minister, Adil Abdul-Mahdi, has revealed details of his interactions with Trump in the weeks leading up to Soleimani’s assassination in a speech to the Iraqi parliament. He tried to explain several times on live television how Washington had been browbeating him and other Iraqi members of parliament to toe the American line, even threatening to engage in false-flag sniper shootings of both protesters and security personnel in order to inflame the situation, recalling similar modi operandi seen in Cairo in 2009, Libya in 2011, and Maidan in 2014. The purpose of such cynicism was to throw Iraq into chaos.

Here is the reconstruction of the story:

[Speaker of the Council of Representatives of Iraq] Halbousi attended the parliamentary session while almost none of the Sunni members did. This was because the Americans had learned that Abdul-Mehdi was planning to reveal sensitive secrets in the session and sent Halbousi to prevent this. Halbousi cut Abdul-Mehdi off at the commencement of his speech and then asked for the live airing of the session to be stopped. After this, Halbousi together with other members, sat next to Abdul-Mehdi, speaking openly with him but without it being recorded. This is what was discussed in that session that was not broadcast:

Abdul-Mehdi spoke angrily about how the Americans had ruined the country and now refused to complete infrastructure and electricity grid projects unless they were promised 50% of oil revenues, which Abdul-Mehdi refused.

The complete (translated) words of Abdul-Mahdi’s speech to parliament:

This is why I visited China and signed an important agreement with them to undertake the construction instead. Upon my return, Trump called me to ask me to reject this agreement. When I refused, he threatened to unleash huge demonstrations against me that would end my premiership.

Huge demonstrations against me duly materialized and Trump called again to threaten that if I did not comply with his demands, then he would have Marine snipers on tall buildings target protesters and security personnel alike in order to pressure me.

I refused again and handed in my resignation. To this day the Americans insist on us rescinding our deal with the Chinese.

After this, when our Minister of Defense publicly stated that a third party was targeting both protestors and security personnel alike (just as Trump had threatened he would do), I received a new call from Trump threatening to kill both me and the Minister of Defense if we kept on talking about this “third party”.

Nobody imagined that the threat was to be applied to General Soleimani, but it was difficult for Prime Minister Adil Abdul-Mahdi to reveal the weekslong backstory behind the terrorist attack.

I was supposed to meet him [Soleimani] later in the morning when he was killed. He came to deliver a message from Iran in response to the message we had delivered to the Iranians from the Saudis.

We can surmise, judging by Saudi Arabia’s reaction, that some kind of negotiation was going on between Tehran and Riyadh:

The Kingdom’s statement regarding the events in Iraq stresses the Kingdom’s view of the importance of de-escalation to save the countries of the region and their people from the risks of any escalation.

Above all, the Saudi Royal family wanted to let people know immediately that they had not been informed of the U.S. operation:

The kingdom of Saudi Arabia was not consulted regarding the U.S. strike. In light of the rapid developments, the Kingdom stresses the importance of exercising restraint to guard against all acts that may lead to escalation, with severe consequences.

And to emphasize his reluctance for war, Mohammad bin Salman sent a delegation to the United States. Liz Sly, the Washington Post Beirut bureau chief, tweated:

Saudi Arabia is sending a delegation to Washington to urge restraint with Iran on behalf of [Persian] Gulf states. The message will be: ‘Please spare us the pain of going through another war’.

What clearly emerges is that the success of the operation against Soleimani had nothing to do with the intelligence gathering of the U.S. or Israel. It was known to all and sundry that Soleimani was heading to Baghdad in a diplomatic capacity that acknowledged Iraq’s efforts to mediate a solution to the regional crisis with Saudi Arabia.

It would seem that the Saudis, Iranians and Iraqis were well on the way towards averting a regional conflict involving Syria, Iraq and Yemen. Riyadh’s reaction to the American strike evinced no public joy or celebration. Qatar, while not seeing eye to eye with Riyadh on many issues, also immediately expressed solidarity with Tehran, hosting a meeting at a senior government level with Mohammad Zarif Jarif, the Iranian foreign minister. Even Turkey and Egypt, when commenting on the asassination, employed moderating language.

This could reflect a fear of being on the receiving end of Iran’s retaliation. Qatar, the country from which the drone that killed Soleimani took off, is only a stone’s throw away from Iran, situated on the other side of the Strait of Hormuz. Riyadh and Tel Aviv, Tehran’s regional enemies, both know that a military conflict with Iran would mean the end of the Saudi royal family.

When the words of the Iraqi prime minister are linked back to the geopolitical and energy agreements in the region, then the worrying picture starts to emerge of a desperate U.S. lashing out at a world turning its back on a unipolar world order in favor of the emerging multipolar about which I have long written.

The US, now considering itself a net energy exporter as a result of the shale-oil revolution (on which the jury is still out), no longer needs to import oil from the Middle East. However, this does not mean that oil can now be traded in any other currency other than the U.S. dollar.

The petrodollar is what ensures that the U.S. dollar retains its status as the global reserve currency, granting the U.S. a monopolistic position from which it derives enormous benefits from playing the role of regional hegemon.

This privileged position of holding the global reserve currency also ensures that the U.S. can easily fund its war machine by virtue of the fact that much of the world is obliged to buy its treasury bonds that it is simply able to conjure out of thin air. To threaten this comfortable arrangement is to threaten Washington’s global power.

Even so, the geopolitical and economic trend is inexorably towards a multipolar world order, with China increasingly playing a leading role, especially in the Middle East and South America.

Venezuela, Russia, Iran, Iraq, Qatar and Saudi Arabia together make up the overwhelming majority of oil and gas reserves in the world. The first three have an elevated relationship with Beijing and are very much in the multipolar camp, something that China and Russia are keen to further consolidate in order to ensure the future growth for the Eurasian supercontinent without war and conflict.

Saudi Arabia, on the other hand, is pro-US but could gravitate towards the Sino-Russian camp both militarily and in terms of energy. The same process is going on with Iraq and Qatar thanks to Washington’s numerous strategic errors in the region starting from Iraq in 2003, Libya in 2011 and Syria and Yemen in recent years.

The agreement between Iraq and China is a prime example of how Beijing intends to use the Iraq-Iran-Syria troika to revive the Middle East and and link it to the Chinese Belt and Road Initiative.

While Doha and Riyadh would be the first to suffer economically from such an agreement, Beijing’s economic power is such that, with its win-win approach, there is room for everyone.

The U.S. is absent in this picture, with little ability to influence events or offer any appealing economic alternatives.

Washington would like to prevent any Eurasian integration by unleashing chaos and destruction in the region, and killing Soleimani served this purpose.  The U.S. cannot contemplate the idea of the dollar losing its status as the global reserve currency. Trump is engaging in a desperate gamble that could have disastrous consequences.

The region, in a worst-case scenario, could be engulfed in a devastating war involving multiple countries. Oil refineries could be destroyed all across the region, a quarter of the world’s oil transit could be blocked, oil prices would skyrocket ($200-$300 a barrel) and dozens of countries would be plunged into a global financial crisis. The blame would be laid squarely at Trump’s feet, ending his chances for re-election.

To try and keep everyone in line, Washington is left to resort to terrorism, lies and unspecified threats of visiting destruction on friends and enemies alike.

Trump has evidently been convinced by someone that the U.S. can do without the Middle East, that it can do without allies in the region, and that nobody would ever dare to sell oil in any other currency than the U.S. dollar.

Soleimani’s death is the result of a convergence of U.S. and Israeli interests. With no other way of halting Eurasian integration, Washington can only throw the region into chaos by targeting countries like Iran, Iraq and Syria that are central to the Eurasian project. While Israel has never had the ability or audacity to carry out such an assassination itself, the importance of the Israel Lobby to Trump’s electoral success would have influenced his decision, all the more so in an election year .

Trump believed his drone attack could solve all his problems by frightening his opponents, winning the support of his voters (by equating Soleimani’s assassination to Osama bin Laden’s), and sending a warning to Arab countries of the dangers of deepening their ties with China.

The assassination of Soleimani is the U.S. lashing out at its steady loss of influence in the region. The Iraqi attempt to mediate a lasting peace between Iran and Saudi Arabia has been scuppered by the U.S. and Israel’s determination to prevent peace in the region and instead increase chaos and instability.

Washington has not achieved its hegemonic status through a preference for diplomacy and calm dialogue, and Trump has no intention of departing from this approach.

Washington’s friends and enemies alike must acknowledge this reality and implement the countermeasures necessary to contain the madness.